By Moh Ghufron 10:57 AM Post a Comment
Pandawa Water World in Solo Baru, Sukoharjo - Ever hear of the area named Solo Baru? If that does not know, would have thought that Solo Baru is part of Solo city. But in fact is not. Solo Baru is an elite area contained in Sukoharjo regency. This area was close to the city of Solo. That is to say as a satellite town of Solo. Here stood the elite housing as well as several business area with huge potential. 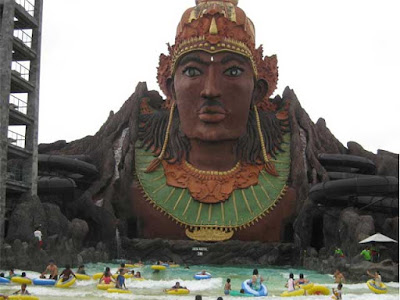 Opening hours and admission price to Pandawa Water World
These water tourism in Solo Baru, Sukoharjo begin to open at 9 am to 6 pm. Specially weekend or Saturday and Sunday, starting open from 8 am. As for the entrance fee to Pandawa Water World is IDR 80,000 on weekdays. Meanwhile, if Saturdays, Sundays and national holidays, increased to IDR 100,000. For more info can be seen on the official web Pandawa Water World namely in www(dot)pandawa-lima(dot)com or contact Customer Service at (+62) 271 626 955.

Similarly was a little review of Pandawa Water World in Solo Baru, Sukoharjo. Do not forget to invite your family for a vacation to the tourist attraction in Solo Baru. Usually on holidays many who visit, both from the city of Solo as well as from other areas.