By Moh Ghufron 10:38 PM Post a Comment
Enjoy Souvenir Shopping at Malioboro, Most Beautiful Places - Malioboro, the name of a street in Yogyakarta, which is very famous everywhere. Along the way a lot of vendors who peddle merchandise. The majority of traders along this street is a typical souvenir merchants Yogyakarta example Dagadu shirts, unique shirts, Yogyakarta batik, handicrafts, etc. Nevertheless there are also selling food to the visitors. 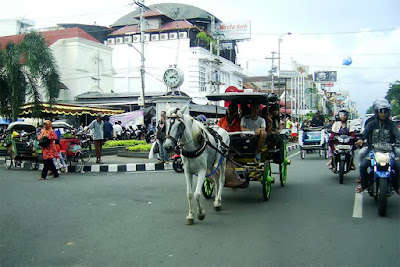 Legendary Hotel
Entering Malioboro area, tourists will be greeted by legendary hotel in Yogyakarta. The hotel was founded in 1908, the hotel started operating since 1911 has been to fix itself, from cottages to be a magnificent four-star hotel while maintaining the originally architectural pattern which is a main building and additional buildings on the right and left wings. Beginning named "Grand Hotel De Djokdja" the Dutch colonial period were only accommodate guests of the Governor of the Netherlands alone. Now the Hotel Garuda that can be accessed by the public. If accidental tourists stay at this place and occupy the rooms 911 or 912, the room had become office MBO (Markas Besar Oemoem) TKR leadership of the Great General Sudirman.

Fort Vredeburg and Gedung Agung
At the end of Malioboro street, tourists can stop at Fort Vredeburg are confronted with Gedung Agung. This fort was once the base of the Dutch protection from possible attacks Kraton forces. As usual every fortress, a place that was built in 1765 square-shaped high wall encircling the area inside with a watchtower at the four corners that are used as a patrol. The most southern of the tower, tourists can enjoy the views to the Palace Sultanate of Yogyakarta and several other historical buildings. 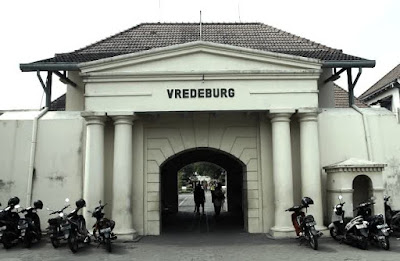 While Gedung Agung which is situated in front of Fort Vredeburg, in 1946 to 1949 is used by the Dutch colonial administration officials as his residence. In addition, Gedung Agung had become the State Palace during Soekarno's presidency when the nation's capital was moved to Yogyakarta.

History Yogyakarta Malioboro
Malioboro naming history have been described in the notes historian Carey PBR namely: the word 'Malioboro' comes from Sanskrit language "Malyabhara" meaning a bouquet of flowers. Said that the story in the kingdom of Mataram, Malioboro always be a place for the implementation of the main line celebration ceremony or procession Kraton. 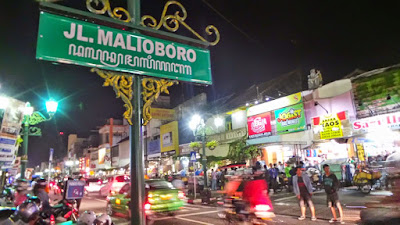 Malioboro street scene at night
At night, Malioboro has a very beautiful scenery. With the lights on, as well as a wide range of diverse activities of citizens. Many communities are hanging in Malioboro, both the automotive community, arts and so on. Street musician who often act in Malioboro singers not as common as in other areas. They are more creative, using various instruments. There were himself and others that make up the group. There is also acting to mime.