Tourist attraction Cetho temple in Karanganyar and romantic side

By Moh Ghufron 11:09 AM Post a Comment
Tourist attraction Cetho temple in Karanganyar and romantic side - Indonesia or at Majapahit era is called the 'Nusantara' is an area formerly be occupied by the community with the majority of Hinduism, Buddhism, Animism and Dynamism. Therefore, in some areas in Indonesia there are many historical relics such as temple. The temple is so famous to foreign countries including the Borobudur and Prambanan. However, not only them, in other regions of Indonesia there are also relics of the temple. But not as famous Borobudur. One of the relic of the temple is not so well known in Nusantara are Cetho and Sukuh temple in Karanganyar regency, Central Java. Both of this temple is adjacent and has a beauty that is quite interesting. Cetho temple in Karanganyar is one of the relics of Hindu temple which have been built at end of the reign Majapahit kingdom.

The location of tourist attraction Cetho temple
Tourist destination of Cetho temple is situated in the Cetho hamlet, Gumeng village, Ngargoyoso subdistrict, Karanganyar regency, Central Java province. If you are using GPS so you can find the location of the Cetho temple in the GPS coordinates: 7 ° 35 '30.22 "S, + 111 ° 9' 19.87" E. This location is located on the slope of Lawu mountain and has an altitude of 1,496 meters above sea level. If you want to go to the tourist attraction in Karanganyar, you can through the path of Solo->Karanganyar->Tawangmangu. Before you until Tawangmangu, you can see a warning sign to Cetho temple. If you see this sign you just turn left and down the main street that exist. It later along the way you will be presented with scenery of the Kemuning tea garden is very beautiful and appear green. The access road to Cetho temple is pretty good. But you must be careful because this road is relatively up and down and winding.

The romantic side of tourist attraction Cetho temple
Tourist location of Cetho temple has its own romantic side compared to other places in Karanganyar. From the access road alone is quite interesting namely with the scenery of tea garden that resembles landscape the peak of Bogor. Cetho temple construction site is located in the hills. So as to reach it, you need of struggle. Car or motorcycle that you use must be primed. If not, may actually not strong. On the other side, if you've arrived at the temple, the scenery was incredible. Nothing wrong if every day a lot of couples who are dating in this place. At certain moments Cetho temple is be covered by fog. Thereby increasing a dramatic impression of this place. Cool atmosphere makes us who were there felt comfortable and did not want to go home. 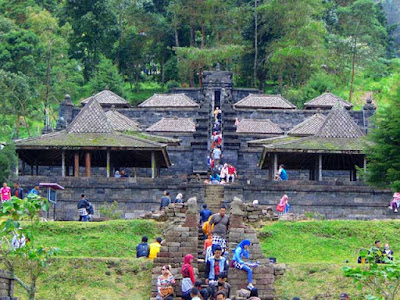 The history of tourist attraction Cetho temple
As we expressed at the beginning that Cetho temple is a relic of the Hindu religion. Until now at certain moments in the location Cetho temple implemented Hindu worship. So do not be surprised if you find some of the offerings are still left in the corners of this place. Cetho temple was first discovered by a man of Dutch namely Van de Vlies in 1842. Initially when found, the condition of this temple was not like is now. It just stone ruins found in 14 terraces. In 1970, the Cetho temple was restored by Humardani, a personal assistant of President Soeharto. At the time of the restoration of the temple, constructed gate and hall were later in the day protested by archaeologists because it does not comply with the rules of restoration. But in fact, until today no tear down the gate. It is precisely the presence of the gate and the hall can make the atmosphere becomes more beautiful. Based on the research of experts, Cetho temple probably built in 1451-1470, approximately during the reign of King Brawijaya V in Majapahit. The purpose of making this temple, estimated for purposes ruwatan because at that time a lot of chaos.

The admission price to tourist attraction Cetho temple
To enter this temple, we only spend about IDR 3,000 and IDR 10,000 for foreign tourists.