By Moh Ghufron 8:45 PM Post a Comment
Enjoy the typical food of Tegal in Taman Rakyat Slawi Ayu - Tegal regency has an amusement park for gatherings or just to enjoy the typical culinary of Tegal. The park is Taman Rakyat Slawi Ayu or commonly called TRASA. TRASA recently opened early in 2013 and officially opened by the Regent Tegal Moch. Hery Soelistiyawan. TRASA is located right in front of bus station Slawi. The location is very strategic because it is located in front of the main road that connects Tegal-Purwokerto and vice versa.

The purpose of the establishment of Taman Rakyat Slawi Ayu (TRASA) in Slawi is as a place of community interaction Tegal in various activities, such as social activities, performing arts, sports and so on. TRASA is divided into three main parts or so-called shelter. In the north shelter reserved for sellers of products or souvenirs typical of Tegal. For the middle shelter more devoted to community activities. The middle shelter consists of a tiered stage and its base using a special floor. So suitable for use as a show. Whereas the southern part of shelter contains of street vendors selling fast food. So for those of you who want to find a culinary center and souvenirs typical of Tegal, it's here. 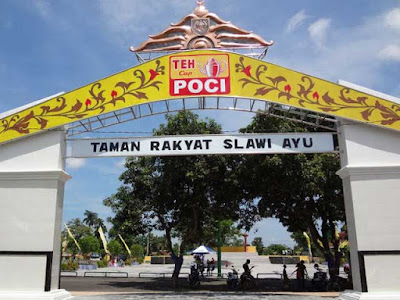 TRASA will look crowded when mid-afternoon until night. There are so many activities conducted there. Ranging from just sit around, play ball, play bike, until the activities of specific communities. Especially when a holiday, not only the community who gathered there, some visitors also brought along family members to enjoy the facilities that exist at TRASA.

The typical food of Tegal
Tegal is famous for its distinctive food 'Tahu Aci' made from starch. Tahu Aci made by filling tofu with starch. Besides Tofu Aci there is also 'Pilus' namely snack made from flour and leaves of chives. Other food that Kupat Glabed Randugunting (Ketupat equipped with sauce and side dish given the shells satay). The famous beverage is 'Teh Poci' typical of Tegal. Teh Poci is tea that is brewed with hot water using 'Poci' (teapot made of clay) and for sweetening of tea using a sugar cube. Whereas the society of Tegal usually for daily meals with 'Pongol rice'. Ponggol rice is rice given side dish tofu, tempeh, anchovies and given oseng tempeh.