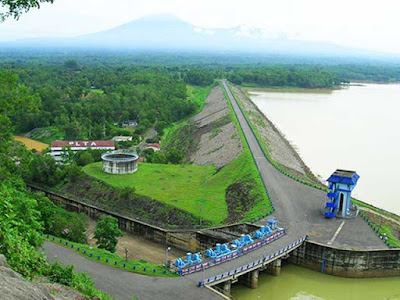 The history of Gajah Mungkur reservoir - Wonogiri
Gajah Mungkur reservoir was built in 1976 until 1981. The location of its construction in the downstream confluence of Keduang river with puddle area reach 8,800 hectares. Extensive land acquired as a whole is 90 square kilometers which at that time consisted of 51 villages and 7 subdistricts. Workmanship the construction of Gajah Mungkur reservoir is self-managed with the assistance a consultant of Nippon Koei Co. Ltd. of Japan. In the process of land acquisition, there are 12,525 head of families with a total of 68,750 inhabitants who had to leave their homeland to perform transmigration Bedol Desa to several areas in Sumatra, such as:

It was said that, at that time not all the residents are willing to be relocated from their ancestral lands. Finally the government at that time were still controlled by the New Order regime drowning them along with their possessions by way of flow through reservoir finished it.

Similarly was a glimpse of tourist attraction Gajah Mungkur reservoir in Wonogiri which currently used as a favorite tourist destination in Wonogiri regency.