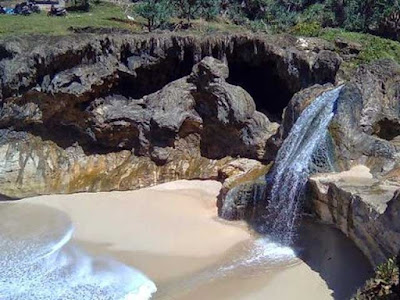 Not only that, the scenery offered by this beach is also quite sensational. After enjoying the natural gift, use the remaining time for fishing with friends or family is the right choice. This beach has a fresh water because it is a freshwater estuary of the river in the area. Source of fresh water also has recently been found. The survey team water potential Wonogiri regency government headed by Head of Public Relation Eko Muslich Martono SE MM find new spring Banyutowo source near Paranggupito beach.

"Debit large enough and clear water. But unfortunately the potential for fresh water only lost to the southern ocean. In fact, the area Paranggupito always stricken by drought when the dry season", he said. As the potential of clean water, presumably Banyutowo source can be exploited to adequate water need of Paranggupito resident. Finding Banyutowo source which is underground river, he added, is in the hills gap which is about three kilometers from the northern of south beach, precisely in Ringin hamlet, Parang village, Paranggupito subdistrict, Wonogiri regency.

The facility of tourist attraction Banyutowo beach
Tourist attraction Banyutowo beach arguably has not been a lot of development done by the regional government. So that the facilities built is still minimal. Need to venture from relevant agencies so that this beach tourism in Wonogiri visited by many people. However, the other side of this beach is still relatively deserted and makes its own privileges because not many visitors so it can be more calm for a vacation off fatigue.