By Moh Ghufron 6:44 PM Post a Comment
Kahyangan religious tourism in Wonogiri - Java community are arguably unique in terms of belief. Although most of the Java community are Muslims but the various practices in the form of rituals, ceremonies, lelaku and others many still do today. There are various places on the island of Java, which is often used as a place of ritual to a particular community. One of them is located in Wonogiri, Central Java. Tourist attraction we will discuss this time is a religious tourism, especially for the Javanese society, which is often used as a place of ritual in Wonogiri regency that is in the Kahyangan. Some people call it Kayangan.

Tourist attraction Kahyangan is an area located in Wonogiri in the middle of natural forest that are still beautiful. At this location mystique is very pronounced. This place has its own charm to serve as a place to meditate because according to public belief, Kahyangan is petilasan of Panembahan Senopati before becoming King of Mataram. At that time Danang Sutowijoyo (forename Panembahan Senopati) want to be king in the land of Java. He then tirakat, meditating in the Kahyangan. When meditating, Danang Sutowijiyo met with Nyi Roro Kidul who is ruler of the south beach. Nyi Roro Kidul then entered into an agreement with Sutowijoyo to help become a king. According to the story, Nyi Roro Kidul is finally married to Sutowijoyo. It was the one who later made the Mataram kingdom led by Sutowijoyo respected by other regions of Nusantara. Mataram kingdom is a kingdom in Java land which stand after Pajang empire led by Sultan Hadiwijaya or Joko Tingkir experiencing the destruction. This Mataram kingdom later gave birth to the Sultanate of Yogyakarta and Surakarta kingdom in the present. 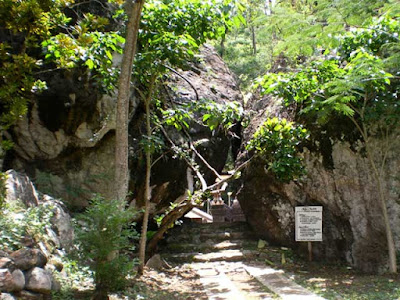 Kahyangan has six parts of the region are very famous namely Sela Payung, Sela Gawok, Sela Gapit/Penangkep, Sela Gilang/Pesalatan, Sela Betek and Kahyangan bathhouse which is nothing but a confluence of two rivers flow which in the Java language is called by the name of Kedung. In this Kedung many people who do "Laku Kungkum" and if do just that is believed to help all desires be fulfilled.

Similarly was a glimpse of the religious tourist spot located in Wonogiri, Central Java namely Kahyangan area. In spite of it all, all form of ritual performed by the society is the result of their own beliefs. For those of you who do not believe in various rituals is enough to study it as knowledge.