Vacation to turtle conservation on the Samas beach

By Moh Ghufron 8:52 PM Post a Comment
Samas beach in Bantul, maybe which is famous for turtle conservation - family vacation spot very exciting in Yogyakarta very diverse. You can choose to travel to natural tourism spot, cultural tours, tour games, etc. One of the tourist attractions in Yogyakarta very cool is Samas beach located in the district of Bantul, Yogyakarta. This beach offers the natural beauty of the beautiful beaches and deltas of rivers and freshwater lakes that formed the lake. Samas beach in Bantul district of Yogyakarta is also famous for the presence of Turtle Conservation administered by the Natural Resources Conservation Agency of Yogyakarta along with a number of environmental NGOs.

The beauty of Samas beach, Bantul, Yogyakarta
Almost the same as Parangtritis beach, Samas beach also has big waves. However, Samas beach sand is black, and the beaches lip are a bit steep. Samas beach dotted with river deltas and freshwater lakes that formed the lake. The lake is currently used for the development of fisheries, turtles and giant prawns as well as to the fishing location. 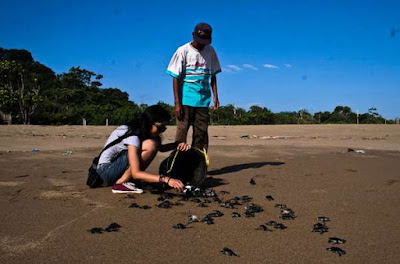 Another attraction of the beach Samas is the Turtle Conservation. Naturally indeed Samas beach is used as a layover location of several species of sea turtles, such as the Green Turtle, Hawksbill Turtle, Turtle Blimbing and Lekang Turtles. This turtle stopped at Samas beach to lay their eggs and then back again to the sea. As for the eggs were left in the sand until they hatch by itself.

Small turtles hatch will instinctively ran into the water and swim. Natural Resources Conservation Agency of Yogyakarta felt the need to help the turtles to reproduce, because a lot of the existing problems, both from humans, other animals or the natural conditions are unfavorable. The eggs were left on the beach, by the Natural Resources Conservation Center was taken and incubated in semi-natural. After hatching and small turtles 3 months old, will be released in the sea. The release of turtles usually performed by school children as an effort to provide an example in order to preserve the existence of the turtles in the wild.

Thus was about Samas beach in Bantul famous turtle conservation. May be beneficial to us all.