In ancient times, in the land of Java stand two mutually neighboring kingdoms namely Pengging Kingdom and Baka Kingdom. Pengging is a very fertile kingdom. This kingdom has excellent products in agriculture. It is much the envy of surrounding kingdoms. Pengging kingdom led by a very wise king is named Prabu Damar Maya. Prabu Damar Maya has a mighty crown prince named Bandung Bondowoso. While the neighboring kingdom Pengging ie Baka kingdom is a kingdom inhabited by giants. Baka kingdom led by a king named Prabu Baka and have Patih named Patih Gupala. Prabu Baka had a daughter named of Roro Jonggrang. In contrast to their parents, it turns out of Roro Jonggrang has a very pretty face like a human.

Once, Prabu Baka have a desire to dominate Pengging Kingdom because it is a very interesting kingdom to be conquered. The reason is nothing but the problems are so abundant natural resources. If it can be dominate Pengging, then Prabu Baka may have a territory that is fertile and can more revenue from the taxation of his people. To realize this desire, Prabu Baka call the Patih Gupala. Prabu Baka give orders to Patih Gupala in order to prepare everything necessary, from start to strengthen weapons, to train the army to be more resilient in battle. 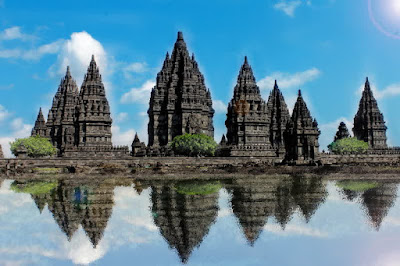 Once is enough, Baka royal army went towards Pengging to attack. In this group participate himself king namely Prabu Baka. Pengging kingdom who got this sudden attack overwhelmed in the face. Prabu Damar Maya think hard to cope with the Baka royal army brutally attacked. Finally, Prabu Damar Maya call his crown prince, named Bandung Bondowoso. Bondowoso has a mighty body and has extraordinary magic power. Bondowoso requested directly by the father to overcome these attacks directly to the battlefield. Bravely he crushed a giant army of the Kingdom of Baka. Long story short, Bondowoso managed to repulse soldiers Kingdom Baka. In fact, the king of the kingdom Baka namely Prabu Baka were killed in the battle field.

Elsewhere, Roro Jonggrang began to fret saw Bondowoso work from within the palace. Roro Jonggrang proposed conditions, likely to be implemented by Bondowoso and she will be the queen. She thought hard how to keep Bondowoso failed to implement its requirements. Eventually she gained ideas. Roro Jonggrang collect the palace maids and mothers resident of Baka kingdom. These mothers were asked to burn rice straw and hit lesung. This is to make it appear as if the morning has arrived.

At the construction site of the temple, genie troops from Bondowoso heard the sound of lesung and saw a reddish glow on the eastern horizon, thinking morning had arrived. They immediately ran to leave the job of making the temple and back to nature. Bondowoso who know about it are very angry. Construction of the temple came to a standstill, while only less than 1 temple only. Genie troops from Bondowoso successfully complete the 999 temples and 1 lake. Bondowoso who know that all this work of Roro Jonggrang became increasingly angry. 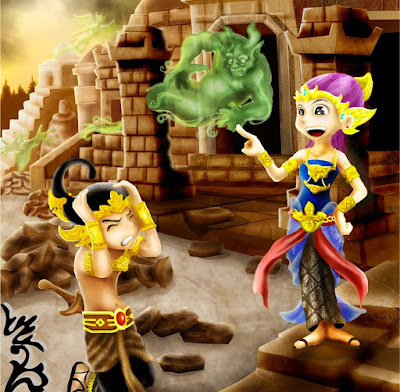 At the time Roro Jonggrang approached Bondowoso to inform him that he had failed to fulfill the requirements requested, Bondowoso suddenly cast spells and cursed Roro Jongrang into a statue. This statue continues to develop into a temple. Finally, Roro Jonggrang turned into a temple and fulfilled the 1000 temples which she requested. People called this temple as "Sewu temple", because it was originally amounted to a thousand pieces. While the statue of Durga in the room north of the main temple at Prambanan, trusted by society as the embodiment Roro Jonggrang condemned by Bondowoso. In the Java language, Roro Jonggrang means "girl slim".

The above story is folklore about tourist attraction Prambanan temple. However, believe it or not all of these stories as if actually happened. Prambanan temple in the story amounted to 1000 pieces, really there and although it is a pile of stone. Only a few temples are successfully restored and shaped temple. Nowadays you can visit the Prambanan temple in the area is very beautiful. In the southern region of about 5 km Prambanan temple, the temple stands the queen Baka. The temple area is also believed to be the residence of Prabu Baka (Baka Kingdom). In Klaten district, there are wells/lake Jalatunda which can be a lake made Bondowoso as in the story above. In Boyolali district, there is the area called Pengging, which may have once been established a kingdom called Pengging, as in the legend above. Do you believe that this legend is the real story?